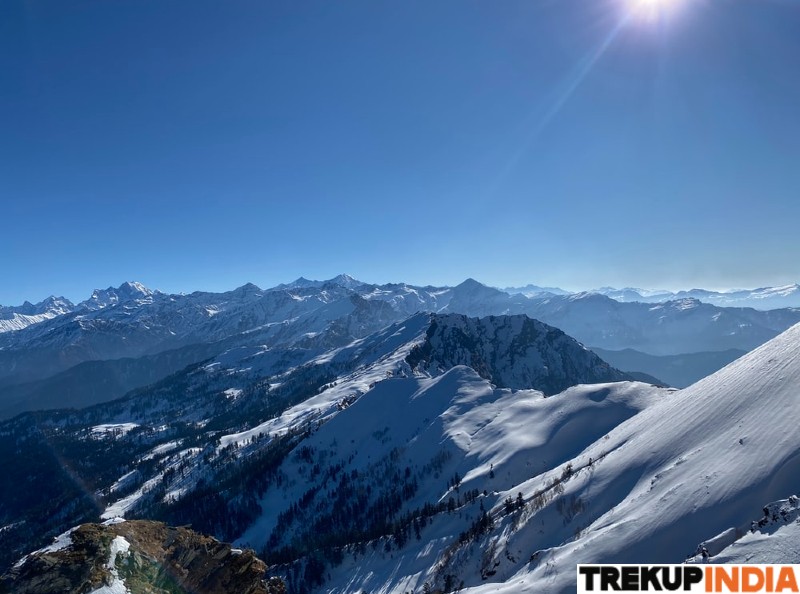 Our recent treks to Pindari in the Pindari and Sunderdhunga valleys of Kumaon We were able to stumble upon a couple of interesting day hikes. Due to the closing of Kafni the Glacier trail (due to land slides), The TrekupIndia team were able to have a few more days left to go on additional excursions. We were able to hear an international group of mountain cyclists talk about an all-day hike starting from Khati village. When we spoke to them more we were told of a day-long hike to the top of the mountain over Khati village. Its name for the hike was not known, but it was derived in the footsteps of European cyclists. A name that intrigued my eye is “Pankhwa Top.” Having read about Pankhwa Dhar (or Top) in Harish Kapadia’s book, requested my guide’s particulars of the trek. Pankhwa Dhar is located on the highest point of the connecting ridge over Khati village. You must climb through the thick woods that is Pangras Dhar and pass the twin meadows of Jaikun Dhar and Bajling Dhar. We estimated the from the trail up to Pankhwa Top to be around 12km one way. It will require camping overnight. We had an extra day left we contemplated hiking towards Bajling Dhar and camping there for the night.

We were advised to begin early because it usually rains later in the morning. There isn’t any sources of drinking water along the route, which is why we were required to carry additional water throughout the entire journey. There are two well-known routes that lead to Bajling Dhar from Khati. One involves retracing the trail that leads through Kharkiya and then taking one that climbs to over the forest ridge (from Khati school) to Jaikun and Bajling Dhar. The second is a shorter but more steep one that climbs up the forest ridge over the New KMVN Lodge , which is on Khati up to the Dwali trail. The second trail was more logical to usbecause it was a cut-off and we could imagine returning to base before the typical afternoon storms.

The majority members of members of the Pindari Team choosing to leave to go to Almora… Sudhir Akhil along with me, were the only ones on this trek. After getting up in the early morning and saying farewell to fellow trekkers, we began our day’s hike. We had a cook as our guide Mohan. By taking the Khati-Dwali trail we revisited the Pindari trail, which is from where we’d started earlier in the day. As we passed by the new KMVN Guest Lodge, Mohan took a sharp left and followed an unnoticed trail that climbed the ridge of forest to our left. “Short-cut hain, sir,” Mohan said with conviction. When we entered a thick forest trail The climb was steep with never-ending scissor bends. However, Mohan was right in his report that the trail was frequented, and frequented by shepherds and locals often. About an hour and a half of strenuous climbing before we arrived at the small hill known as Pangrus Dhar. We saw a few abandoned shepherd huts with no roofs.

In front behind us lay the ridge that connects starting from Jaikun dhar (not visible and behind the ridge) to Bajling Top towards our right. After climbing over 1200 feet, we required 850 more feet to climb. We continued along the forested ridge to our right , and eventually came to the first meadow to be open. The views from this meadow were breathtaking. The peaks were obscured by clouds, yet they still created a breathtaking view. After leaving this beautiful meadow and re-entering the ridge of forest. We could see Maiktoli Peak towards Sunderdhunga Valley from a few locations in the forest that were not as dense. The weather began to get worse when clouds started to encircle the ridge. We knew that we needed to go for it for a clear perspective at Bajling Top. When we reached the higher terrain on the forest ridge an easy 20 minutes of ridge walking was all it took to walk to the meadows of Bajling Top. After passing by an ancient Temple, we were welcomed with a magnificent panorama of the lush grassland of Bajling.

When we came down from the hill’s grassy top we found ourselves in an area, from which we had a 360 degree view of the Pindari Valley. To our left, and below there was Khati Village. The forest ridge in front of us climbed up towards Pankhwa Top, which was evident in front of. To the left of Pankhwa we could observe Nandabaner (6,236 metres), Nandakot (6,861 m) and Laspadhura (5,913 m) peak. To our left below there was Supi village. Mohan said that you can hike between Supi village all the way to Bajling Dhar and Supi Village is connected by an auto-friendly road. Mohan also recommended the trek in winter during the time that Bajling Dhar receives snowfall.

The path that leads to Pankhwa Top did not look at all, but it would easily be more than 8km of ridge walking from here. I remembered the photographs at the Pankhwa Top from Harish Kapadia’s work. One can even view the Pindari Glacier’s ice fields at Pankhwa Top, something I would like to observe. As the weather was forecast to not permit us to go to Pankhwa Top, we decided to return to Khati. We could make a couple of phone calls from this location however the reception was poor. The return trip to Khati was an easy, but tiring experience. Our guide led us through another trail that proved to be slippery and painful experience in the dense forest without trace of a trail. It was ironic that Mohan did not know about the path and was unable to acknowledge his lapse. We watched him walk through the forest’s slippery slope in his green Paragon slippers with ease, whereas we were sliding into hiking shoes. This shortcut is one I wouldn’t suggest to anybody.

To conclude, Bajling Top Trek is an easy, leisurely trek which deserves a mention. The hike is recommended to people who want to do different while hiking through Pindari Valley. If it is clear you can see the view from summit are breathtaking. You have a range of options to choose from hiking further toward Pankhwa Top or down to Supi Village or doing a hike up the ridge to Dhakuri campsite that is the most stunning camping spot in the region.